mathewscott said:
I guarantee you if you trans to at least 2 gal fabric pots your problems will be behind you.
Click to expand...

What about air pots...any experience with them?

taproot said:
What about air pots...any experience with them?
Click to expand...

Those airpots are pretty pricey considering you could drill a bunch of holes in a regular plastic pot and achieve the same thing.

taproot said:
It's kinda a cab...just a wire rack wrapped with some panda film...very cheesy but all I had until I can build a small cab. I want to get a 36w x 24D x 52H cab soon. The room is a 12x12 and it's about 64 with no lights and the leds seem to get it to about 68/69F. The getto cab is about 73-75F with the leds in it which I thought would be enough. I was thinking of getting a cheap grow tent to hold me over until I can build a nice wood cab....do the tents retain heat better? A 36W x 24 D tent would be enough i think.
Click to expand...

Yeah that's not warm enough man. For leds. And your pots are probably cold. So the roots are really cold. Slowing growth and everything else. You might get some heating pads. And set them under the pots. To warm up your media. Like you do cuts n germing seeds.

whytewidow said:
Yeah that's not warm enough man. For leds. And your pots are probably cold. So the roots are really cold. Slowing growth and everything else. You might get some heating pads. And set them under the pots. To warm up your media. Like you do cuts n germing seeds.
Click to expand...

I've faught cold temps for the last month and a half. We have all 4 seasons here. Winter usually lasts about 2 months here. And it usually hangs around 20-38° throughout winter. But so far this year it hasnt been above 10° my flowering tents got hit bc no lights for 12hrs. I run lights on at night. Bc that's when it's the coldest. I run 4pm to 4am. I get up at 530am for work. A few times I got up fir work and in the tents was 40° they dont like that cold ass shit at night. Lol. So I put little heaters on a temp sensors. That kick the heaters on n off as needed. With sonoffs. They are cheap. And you can control and check temp/humidity from your phone.

You might check into them. The wireless switch and sensor are less than 20 bucks from Amazon put them in line with a heater. So your heater doesnt run nonstop. I also control my lights and fans with them. No external timers anymore. As ling as my.phone has service. I have control of everything that run off of 120v

My heaters just kicked on. They run till the tent gets to whatever temp I set it. Then they kick off. Just like a basic thermostat.

Run your lights at half power in veg. Use at least 1 ml of a cal-mag nutrient per gallon if using RO .
My veg room runs between 60-72 degrees in the winter, flower room maxes out at 77 degrees running LED's.
1

Airwalker16 said:
Ya I'm starting to get his issues.

I think mostly it has to do with everything we've all said, but also the fact that you went from 1,000w to 200.
Click to expand...

The EB strips I am using haven't caused any issues as far as light burn. Running 600w trough 18 strips and I have had colas grow right up to the light.
I have read you run them the same distance away as the gap between the strips are.
I moved these girls switched to 12/12 switched to flowering nutes, defol, and bumped up the PPM and they bitched hard. Live and learn LOL I backed way off on the nutes. At least with hydro it's pretty easy to tell if nute uptake is negative LOL. Transplant and back off on the nutes will help you I'm sure. 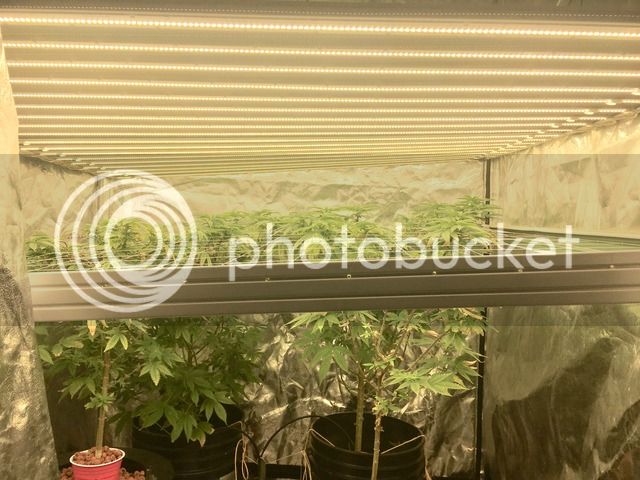 Boatguy said:
Those airpots are pretty pricey considering you could drill a bunch of holes in a regular plastic pot and achieve the same thing.
Click to expand...

The pot with holes is far superior... it doesn't wick itself dry

Solo cups aren't the issue.There are plenty of examples on this forum with solo cup plants taken to harvest. I have a plant that was 5' in a solo before being flipped.Veg'd for at least 2 months. Had to transplant as it got top heavy during stretch and kept falling over,I was gonna finish it in the solo for kicks.The bucket she's in now isn't much bigger than a solo cup. No,she wasn't in the best shape,but I'm using her to make beans and retiring the strain for now.
Being rootbound isn't even an issue if the plants watering/feeding needs are adhered to. The main culprit is his ENVIRONMENT all the other issues are a result of it.
I know I know,being rootbound & staying in a solo cup isn't ideal. As stated,these are offshoot issues from the enviro.
O

taproot said:
Here some pics. It looks like nute issues but if I put them under the hps they start to improve. I've tried these plants in hempy and now soil with basically the same results. My ppm is about 600M with dyna gro foliage pro with a tap starting at 200ppm.
Click to expand...

I think it may be time to transplant into something bigger

old buzzard said:
I think it may be time to transplant into something bigger
Click to expand...

He did say he did transplant a few days ago.
O

CoB_nUt said:
He did say he did transplant a few days ago.
Click to expand...

Got ya,thank you, my bad.hopefully they start to take care of themselves now.

Have to get temps up, and they need to stay up for optimal growth.

Leaf temp 83-Humidity 70% veg-60%flower. At night, lower Humidity, but temp must not swing from 8 degrees of lights on temp. My night is 77, my day is 83Veg, 78Flower and ramp down till harvest.

That VPD is no joke for growth.

What sucks is alot of space heaters use alot of power, and in homegrows, most likely use more then the light itself. Walmart has $10 heaters, 250watts. I hooked it to a Inkbird and all is great, even in 10F outside, my area never dips below 75F.

And another thing, people can flame away on me about this, but if your only getting 500 par to your plants, your PPM shouldnt be more then 500PPM. If its getting 1000, then 1200ppm should be max..

Cold temps will slow things down but that burning looks like hot nutes or ph wacked.

Canopy here hasn't been over 60 in many weeks, plants will flower fine in the 50s but they will be slow about it.

Get your nutes and ph in check and then stress over vpd.

That your leaves are nice and perky and not all curled tells me the vpd is within an acceptable range.

I think there is a misnomer here when using the term "nute burn". Not necessarily nute burn from overfeeding.But nute/salt burn from the environment being off and the plant not transpiring efficiently.Unhappy roots! You actually figuered it out somewhat and eluded to it mainly in the last PARAGRAPH I fixed for ya. The H.I.D. is creating the environment to drive the plants correctly.


taproot said:
I said i've tried adjusting the nutes from less to more than I normally due. It may be nute burn and if it is then it's something to do with the lighting and environment and how they interact.
I've grown several grows with the same ferts with the same starting and final ppm / ph with success. The only difference this grow is the light.

Those pics of the plants I posted are starting to look better and getting more green color to them and all I did is put them under the HPS..so they still have the same nute strength they had under the leds.
I can feed them exactly the same way with zero changes and they always get that way under led and then recover under hps it's reproducible.

I'm thinking that the low room temp and the humidity played a big part in this and probably didn't let the plant metabolize properly and the nutes built up and burned it.
It's just a theory if it's really nute burn which a few have mentioned. It's just confusing that a light change fixes it. I think the IR in the hps compensates for the low room temp and heats the leaf material up since it penetrates it. I guess this might open the soma more..don't know. Thanks for your input.

jarvild said:
Run your lights at half power in veg. Use at least 1 ml of a cal-mag nutrient per gallon if using RO .
My veg room runs between 60-72 degrees in the winter, flower room maxes out at 77 degrees running LED's.
Click to expand...