Faces of the master race.

Kentucky has honorary colonels, perhaps Tennessee should have officially designated morons? Anybody who pays attention to her for a minute would qualify, only the ignorant and profoundly stupid need apply. The vaccinated people should have been trying to demonstrate the effects she was blathering about and trying the experiment then and there, by trying to stick their keys to their foreheads!

Shit, offer a reward to anybody who can do it without an adhesive!

You can't get too many people to publicly admit they are stupid by direct means, however there are ways it can be done and this is one of them!

that was a thought..i can't wait to put a key on my forehead so i'll never be locked out of my apartment.

Maybe newer keys, but I'd bet every key I have is magnetic. The funny part is that, of all metals to put inside a body, anything with iron isn't one of them. We'd find out who hasn't had their tetanus shots real quick.

Maybe they stick to her forehead using "Jesus Magic"! Look ma, no magnets, no iron either.

mooray said:
Maybe newer keys, but I'd bet every key I have is magnetic.
Click to expand...

How much are you willing to bet on that assertion?
M

Whoa, there's confidence for ya

I stand corrected, it's just the rings that are magnetic. I knew my "keys" were attracted to magnets, but I guess never took the time to see that it was actually the rings.

He'll argue about anything, especially things he knows nothing about.
M

He'll argue about anything, especially things he knows nothing about.
Click to expand...

I thought something was a certain way and was corrected and had no trouble admitting it. No arguing at all. Quit trolling, ya fuckin douche.

mooray said:
I thought something was a certain way and was corrected and had no trouble admitting it. No arguing at all. Quit trolling, ya fuckin douche.
Click to expand...

I'm not going to get into another one of your stupid arguments.
M

Fogdog said:
I'm not going to get into another one of your stupid arguments.
Click to expand...

There was no arguing. Lying loser.

mooray said:
There was no arguing. Lying loser.
Click to expand...

I'm not going to argue with you. So don't even try.

Proooooof that Keys are magnetic!!! 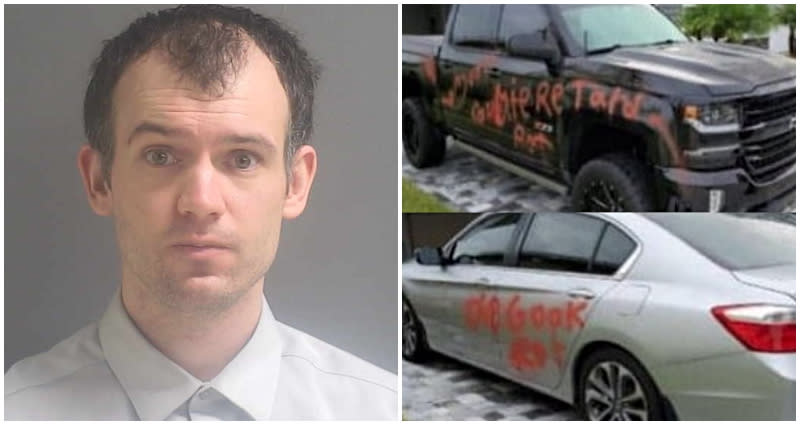 A Daytona Beach, Fla., man is facing up to 30 years in prison after being convicted this week of vandalizing vehicles belonging to an Asian American family with racial slurs. What he did: Kyle Christiansen, 34, spray-painted two of the family’s vehicles and placed nails in their driveway on...

This little gem is a 28 year old Chicago cop who lives with his mom and dad.

On the day of the Capitol siege, Chwiesiuk texted the same friend, “We inside the capital lmfao.”

After the siege made national news, the same friend texted Chwiesiuk to report he’d seen guns were drawn and windows broken out in the U.S. Senate chamber.

“Yeah I was there,” Chwiesiuk allegedly replied, adding later with a racial slur, “(Expletive) don’t snitch.”